The bond between the research laboratory and the clinic is especially strong in the field of photomedicine. Much is learned in preclinical animal models, which is translated to the clinic for investigation, and then refinements in theory and technique are explored back in the laboratory. With many cancers becoming resistant to treatment, photodynamic therapy (PDT) offers a mechanistically distinct alternative. Studies have shown that PDT not only mitigates chemoresistance but also synergizes with chemotherapy and molecularly targeted therapies. From the world of biochemistry comes this unique look at 2 approaches to maximize the photodynamic effect through PDT combinations with targeted therapies: 1) using the molecular response after PDT to guide the selection of targeted agents and 2) preconditioning cancer cells to modulate nuclear molecular targets before PDT.

With photodynamic therapy (PDT), “no matter what you do, if you are lucky, there is a prodeath response,” stated Tayyaba Hasan, PhD, of the Wellman Center for Photomedicine, Harvard Medical School, Massachusetts General Hospital, Boston. However, “simultaneously, there is a prosurvival molecular response, which mitigates the desired outcome with PDT,” she continued. Simply put, these opposing molecular responses are at the heart of the challenge for basic science researchers and clinicians to enhance the photodynamic effect.

In this article, Dr. Hasan explores the preclinical research findings on molecular targets that serve as the clinical foundation for moving PDT forward into the future, essentially in combination treatment. First, the molecular response to PDT in prostate, pancreatic, and ovarian cancer cell models is discussed, featuring the roles of both vascular endothelial growth factor (VEGF) and epidermal growth factor receptor (EGFR) in guiding the selection of targeted agents to join PDT in combination. Second, the role of preconditioning via nuclear receptor targets, such as vitamin D and retinoic acid, before PDT to improve the photodynamic effect is briefly addressed.

Molecular Response to PDT: Focus on VEGF and EGFR

Paradoxically, PDT results in both a prodeath and a prosurvival molecular response (Figure 1). “Even while you are killing the tumor cells, you are creating an environment for the surviving cells to grow further or to metastasize,” Dr. Hasan explained.

Through studying the molecular response to PDT in preclinical models of prostate, pancreatic, and ovarian cancer cells, Dr. Hasan and colleagues discovered that expression of both VEGF and EGFR appears to be impacted by PDT. These findings can guide the selection of targeted agents to join PDT in combination to treat these cancers more effectively than either therapy alone.1–3 In the prostate cancer animal model, “we found that you could actually monitor the buildup of VEGF and that an increase in VEGF was a consequence of PDT,” she revealed.

Overexpression of VEGF seems to contribute to the growth and metastasis of cancers. Therefore, the VEGF pathway represents a prime area for therapeutic intervention, because drugs such as bevacizumab (Avastin) may inhibit VEGF (unpublished data). To negate this VEGF effect associated with PDT, Dr. Hasan and colleagues tested the combination of PDT and bevacizumab in a pancreatic cancer animal model. “The occurrence of lung metastases was decreased with bevacizumab encapsulated with the benzoporphyrin derivative (BPD) photosensitizer,” she declared. Fewer than 20% of the animals with pancreatic cancer developed lung metastases after treatment with bevacizumab plus BPD, compared with 100% of those after treatment with either light alone or bevacizumab alone. “More impressive was the extent of lung metastasis,” added Dr. Hasan. “The animals that got a combination of PDT and bevacizumab had several logs of decrease in the cancer cells/lung.”

In addition, Dr. Hasan’s group also examined c-MET activity in this same pancreatic cancer animal model. Sublethal PDT stimulated c-MET activity, increasing it at different times after PDT with BPD both in vitro and in vivo. “This shows that there are cellular things happening that are going to affect the tumor not only locally but also at a distant site,” she predicted.

Dr. Hasan discussed the expression of EGFR in response to PDT in ovarian cancer. Traditional modalities for ovarian cancer are often not effective, because surgery cannot remove occult microscopic disease, and tumor recurrence frequently occurs as a result of tremendous chemoresistance, she explained. Well suited for superficial small-volume tumors, PDT is a mechanistically distinct alternative; it not only mitigates chemoresistance4 but also synergizes with chemotherapy4,5 and molecularly targeted therapies.1 Dr. Hasan briefly discussed preclinical research focusing on the combination of PDT and chemotherapy (cisplatin4 or carboplatin5) or immunotherapy (cetuximab1 [Erbitux]) for intraperitoneal ovarian cancer. However, PDT does have its challenges in that it mainly requires high selectivity, she admitted.

After PDT, some cells die and some survive. The surviving, dying, or injured cells tend to have altered biomarkers (eg, an effect on EGFR). “Twenty-four hours after PDT,” according to Dr. Hasan, “there is a huge activation of EGFR, and other cytokines and receptors are affected as well.” Mutations that lead to overexpression of EGFR could result in uncontrolled cell division and have been linked to several cancers. Consequently, inhibition of activated EGFR pathways after PDT for intraperitoneal tumors has been under investigation.

To translate these preliminary findings to the clinic, researchers at the University of Pennsylvania tested the combination of an anti-EGFR therapy with resection and PDT.6 Although responses were observed in heavily pretreated patients with intraperitoneal carcinomatosis, this treatment approach was associated with substantial dose-limiting bowel toxicity.6 As a result, the light dose or the PDT dose as a whole could not be increased. “You get the BPD on the tumor quite nicely, but the uninvolved bowel also gets it,” said Dr. Hasan, in an attempt to explain the toxicity.

To establish the significance of enhanced tumor selectivity through molecular targeting and PDT, Hasan and colleagues chose a complex murine model for disseminated ovarian cancer.1,7 They targeted micrometastases with cetuximab as the therapeutic agent and used BPD as the imaging and photoactivatable cytotoxic agent. For monitoring early response, they used a fluorescence microendoscope for in vivo imaging of the microscopic disease. With this approach, “the uninvolved area with no tumor is reasonably clean, so there is more tumor selectivity here,” Dr. Hasan reported. “This looks like we may be getting to where we want to for these complex anatomic sites.”

Dr. Hasan briefly addressed the use of 3D models to optimize sequence and dosing regimens of clinically relevant combination treatment strategies.5,8,9 For instance, joining biologic modeling with high-content imaging enabled Rizvi et al5 to explore the distinct structural/cytotoxic response of carboplatin and PDT in combination for micrometastatic ovarian cancer. Furthermore, they found that treatment with PDT before low-dose carboplatin produced a significant synergistic reduction in residual tumor volume compared with PDT or carboplatin alone; this synergism was not noted when the sequence of treatments was reversed.5 “In the 3D model, we can start looking at these molecular responses and the biomarker expressions in a much more realistic sense than in 2D,” asserted Dr. Hasan.

Preconditioning cancer cells via nuclear receptor targets before PDT is another approach to enhancing the photodynamic response. The use of differentiating agents such as hormones (eg, vitamin D, retinoids) and drugs (eg, methotrexate, 5-fluorouracil [5-FU]) has been investigated in an attempt to stimulate the production of the intracellular photosensitizer protoporphyrin IX (PpIX; Figure 3), stated Dr. Hasan.

Preclinical studies have used aminolevulinic acid (ALA)–dependent PDT to selectively target tumors through the preferential synthesis of PpIX in cancer versus normal cells.10,11 For instance, Ortel et al11 found that short-term differentiation therapy in prostate cancer cells not only increased the overall production of PpIX but also reduced the fraction of cells that contained low levels of PpIX, as demonstrated on flow cytometry and fluorescence microscopy.

Dr. Hasan also mentioned the use of drugs such as 5-FU and methotrexate to enhance PpIX fluorescence in collaborative studies with Dr. E. Maytin at Cleveland Clinic. Pretreatment with 5-FU before ALA-induced PDT to treat skin lesions resulted in an increase in PpIX fluorescence, she revealed. Moreover, Anand et al12 discovered that methotrexate preconditioning of monolayer cultures preferentially increased intracellular PpIX levels twofold to fourfold in skin carcinoma cells versus normal keratinocytes. As a result, photodynamic killing was synergistically enhanced with the combination of low-dose methotrexate before ALA-based PDT compared with PDT alone.12

Cellular differentiation with retinoic acid and retinoic X receptors (RAR/RXR) in the PDT response was also explored by Ortel et al.13 Seventy-two hours after pretreatment of prostate cancer cells with the synthetic androgen R1881, isomers of retinoic acid, and analogues of vitamin D3, an increase was seen in markers for tumor growth and arrest and in the marker for cell differentiation, revealed Dr. Hasan. “Pretreatment with a retinoid gives a pretty dramatic increase in PDT response associated with an increase in PpIX formation,” she concluded.

In preclinical studies of human squamous cell cancer in a mouse model, Anand et al11 turned to calcitriol, an active form of vitamin D3 that is available topically, as a nontoxic pretreatment regimen to increase the efficacy of ALA-based PDT. They applied very low doses of this topical agent to both superficial and subcutaneous skin tumors. Delivered topically or intraperitoneally, calcitriol increased tumoral accumulation of the PDT-activated PpIX up to tenfold, mainly by altering the expression of the porphyrin-synthesis enzymes coproporphyrinogen oxidase (increased) and ferrochelatase (decreased).13 “Vitamin D induces coproporphyrinogen oxidase and reduces ferrochelatase, which is what we would want; these changes will increase PpIX levels,” clarified Dr. Hasan. Finally, after ALA-induced PDT, these calcitriol-pretreated tumors underwent enhanced apoptotic cell death.13

Based on preclinical biochemical research findings regarding the molecular environment both before and after PDT, the best way to move PDT clinically forward seems to be in combination with chemotherapeutic or targeted agents. In prostate, pancreatic, and ovarian cancer cell models, the prominent roles played by both VEGF and EGFR may help guide the selection of targeted agents to join PDT in combination. Furthermore, preconditioning cancer cells via nuclear receptor targets such as vitamin D and retinoic acid before PDT may ultimately improve the photodynamic effect. Clinical testing of vitamin D or retinoids in conjunction with PDT and PpIX accumulation is being performed in patients with Barrett’s esophagus, psoriasis, or actinic keratosis, and in transplantation recipients (who may be prone to basal cell and squamous cell carcinomas).

Molecular response to photodynamic therapy (PDT) may be a key to developing mechanism-based combination treatments with PDT.

How to stimulate the production of the intracellular photosensitizer protoporphyrin IX. 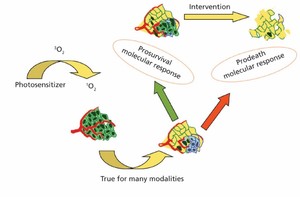 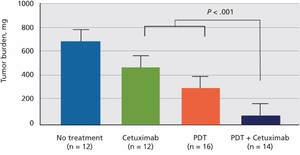