Photodynamic therapy (PDT) requires an optimal combination of drug and light. To achieve the ideal conditions, a tight bond between the research laboratory and the clinic is essential. This continual 2-way street allows preclinical ideas and concepts to be tested in the clinic and refinements in technique to be made. This article clearly illustrates the close connection between the bench and the bedside, exploring intraoperative pleural PDT, challenges in matching fluence and photosensitizer, improvements in animal models that lead to adjustments in the operating room, and clinical applications for interstitial PDT in prostate cancer and beyond.

“The interplay between the laboratory and the clinic will be very important as we go forward,” predicted Keith Cengel, MD, PhD, of the Department of Radiation Oncology at the University of Pennsylvania School of Medicine in Philadelphia. With one foot in the research arena and the other in the surgical suite, Dr. Cengel offered a unique perspective on the challenges involved in testing preclinical ideas and then refining them as needed for optimal use in patients. After discussing the issues involved in adapting pleural photodynamic therapy (PDT) to follow surgery, Dr. Cengel addressed the difficulties of measuring fluorescence and photosensitizer concentrations, described the road from the bench to the clinic and often back to the bench to improve models and explore new pathways, and outlined the modifications in interstitial PDT for prostate and head and neck cancers being investigated in early-stage clinical trials.

“There is a sweet spot in the conditions where you can get PDT killing with a combination of drug and light that is optimal,” explained Dr. Cengel. Based on their study of the effect of photosensitizer dose on fluence rate responses to PDT, Wang et al1 suggested that high fluence rate PDT can be performed under oxygen-conserving efficacious conditions at a low photosensitizer dose. “There is a range of doses of light and sensitizer that are going to work in the clinic,” Dr. Cengel added.

Dr. Cengel and colleagues at the University of Pennsylvania have been working to develop therapies for diseases with few effective treatment options, such as for serosal (pleural or peritoneal) dissemination of malignancy. For instance, pleural PDT consists of preoperative administration of a photosensitizer (porfimer sodium [Photofrin]), macroscopically complete resection, and intraoperative delivery of light to all surfaces. Isotropic light detectors are placed at 7 locations: the apex, anterior chest wall, pericardium, anterior sulcus, posterior sulcus, posterior chest wall, and posterior mediastinum.

Practical considerations were involved in the adaptation of PDT to follow such lengthy surgical procedures. “When you are looking at Photofrin and are using light filters, you are blocking most of the useful light,” explained Dr. Cengel. “When you start using second-generation drugs, it does not work as well. As you move to cover more of the spectrum, it begins to look all black to the surgeon, which probably is not a good thing, not being able to distinguish a vessel from a bone,” he quipped.

The absorption spectra of first- and second-generation photosensitizers have been investigated.2 In their preliminary screening, Gryshuk et al2 found that purpurinimides bearing trifluoromethyl substituents showed enhanced photosensitizing efficacy compared with nonfluorinated analogues. With improvements, the surgeon was able to move this light source around the chest continuously (Figure 1), “because it is a 7-watt source that is about the size of a golf ball,” revealed Dr. Cengel. “As you move around the thoracic cavity, you accumulate dose intermittently for all detectors, essentially making this a form of fractionated PDT.”

However, Dr. Cengel admitted that recurrent disease has remained a problem after intraoperative pleural PDT. Patterns in time to first disease progression indicate “an early storm of recurrence in the first year, followed by late local recurrence at 30 months [Figure 2].” he reported. “Our progression-free survival is not that extraordinary,” Dr. Cengel acknowledged. “It is the overall survival that really makes a difference, but there is room for improvement in local tumor control.”

Improved Matching of Fluence With Photosensitizer

Two challenges in improving outcomes with pleural PDT center on the difficulty associated with the irregularities in lung volume and assessment of reflectance and fluorescence to measure photosensitizer concentrations, according to Dr. Cengel. To begin, having a 7-point dosimetry system to navigate through the relative complexity of the shape of the chest “is like having a 7-point map of Columbus and expecting yourself to be able to find your way around,” he joked. Although it was a cumbersome solution for the operating room at the time, medical physicists at the University of Pennsylvania devised an infrared camera–based system for real-time 3-dimensional mapping of light delivery.

Then preclinical work guided the next step: diffuse correlation spectroscopy (DCS)–based measurement of tissue blood flow and oxygenation.3 Using radiation-induced fibrosarcoma murine tumors, Yu et al3 found that DCS measurement of relative blood flow during PDT revealed a series of PDT-induced peaks and declines dominated by an initial steep increase and subsequent decrease. The duration and slope of the decrease correlated significantly with treatment durability. “Based on this preclinical work, PDT-induced alterations in tumor oxygenation and blood flow appear to correlate with response,” revealed Dr. Cengel. Therefore, for all subsequent clinical trial patients, real-time DCS has been used. However, results may be difficult to interpret and therefore must be coordinated with light-dose measurements, he added.

The second challenge focuses on assessing reflectance and fluorescence to measure photosensitizer concentrations. Dr. Cengel’s colleagues created a technique consisting of a single-channel spectrometer, a laser, a white light, and a multifiber probe to measure photosensitizer levels in multiple tissues before and after PDT. They are using this technique for pleural PDT, in their head and neck trials, and in their upcoming prostate cancer trials. “In the head and neck cases, we have a way to put a parallel probe to collect fluorescence light using a fancy filter set and to show real-time fluorescence photobleaching of the drug,” reported Dr. Cengel.

From the Bench to the Clinic: Improving Models and Exploring New Pathways

Dr. Cengel shared his group’s preclinical results with interstitial HPPH-mediated PDT. Illumination conditions were selected to approximate those previously studied in clinical applications of interstitial PDT, with 150 mW/cm2 established as a reasonable clinical fluence rate for interstitial light delivery.6 The HPPH dose of 1 mg/kg and the drug-light interval of 24 hours were also chosen based on preclinical efficacy guidelines, he explained. They found a significant reduction in tumor mass in mice treated with fluence-dependent HPPH-mediated PDT compared with control mice. Five days after light delivery, they saw evidence that PDT slowed disease progression in treated versus untreated mice.

Taking what they learned back to the clinic, Dr. Cengel’s group briefly explored their ongoing phase I trial of HPPH-mediated PDT. They plan to measure both cytokine profiles and tumor molecular characteristics. “We also have begun to look at the surgically induced and PDT-induced cytokine profiles for all our patients,” he stated. In addition, they plan to create a tissue microarray for all PDT-treated patients with mesothelioma. “There will be well over 100 patients with multiple samples per patient. Ironically, since we started doing lung sparing, we don’t have normal tissues to put on the slides because we leave all the normal tissues in the patient.”

The results with HPPH-mediated PDT on their first 8 patients are shown in Table 1, including the pathology, progression-free survival, and overall survival data. Toxicities were similar to those experienced with porfimer sodium-mediated PDT, with patients having a mild “burn syndrome.” One patient, who had unstable blood pressure during surgery, died of multiple inflammatory complications.

When cytokines were analyzed after pleural PDT, variations were seen in interleukin-10 (IL-10), IL-8, and IL-6. “There is a significant heterogeneity in these patients in terms of measured response,” revealed Dr. Cengel. “This sent us back to the laboratory to consider whether there were differences between 24 and 48 hours fundamentally or qualitatively. In mice, we found conditions that were approximately equally curative in the intact immune system of the mouse.”

Interstitial PDT: For Prostate Cancer and Beyond

Moving from pleural PDT, Dr. Cengel discussed the early clinical results with interstitial PDT as a local salvage option in prostate cancer and the promise of robotic-assisted PDT for lesions in the oral pharynx. Although surgery and ionizing radiotherapy are effective options for prostate cancer, they have been associated with significant morbidity, explained Dr. Cengel. A subset of patients have local recurrence after radiotherapy for whom few established options exist, making this a good area to consider testing interstitial PDT, he added.

Brachytherapy techniques for interstitial radiotherapy are being used experimentally and can be adapted for light delivery. For instance, pretreatment planning can be accomplished with a transrectal ultrasound (TRUS) system to determine the location and length of the sources and detectors. Dr. Cengel emphasized the critical importance of real-time light dosimetry. The distribution of the photosensitizer is fixed by the method of administration, the drug-light interval, and patient-specific factors. If neglected, tissue optical properties may lead to inhomogeneity in the PDT effect and can change over the course of therapy. The tissue topography is a consideration, particularly concerning direct versus scattered light and integrating sphere effects versus shadowing. Also, the light distribution can be measured via isotropic or nonisotropic detector systems and can be adapted to account for changing optical properties.

In terms of early clinical outcomes with prostate interstitial PDT, it appears to lead to necrosis of 50% to 75% of the gland, with mild complications in most patients, according to Dr. Cengel. However, areas of light overdose or light inhomogeneity can lead to severe toxicity, including fistulae. At higher light doses, where prostate necrosis occurs, significant prostate-specific antigen (PSA) responses can be seen. Finally, complete pathologic response is possible with low toxicity, but only with adequate dosimetry and controlled light delivery.

Clearly, an experienced light dosimetry team and equipment are integral to prostate interstitial PDT. However, Dr. Cengel admitted that the University of Pennsylvania’s 6 physicists, 1 laser specialist, and 5 separate carts/towers would not be an ideal solution outside of a very few highly specialized centers. Consequently, a new modifiable treatment planning computer (the P18 System from Spectracure) represents an exportable solution. This computer enables one to load in the ultrasonographic image, perform pretreatment planning, and then calculate where to place the needles, with a laser delivery device to all catheters, explained Dr. Cengel. And its measurements are in real time. A phase I trial of benzoporphyrin derivative–mediated PDT for prostate cancer using this new computer system will begin shortly.

The use of robotically assisted PDT is emerging as a novel technologic alternative.7 “There are places you cannot put a laser easily,” noted Dr. Cengel. For instance, the oral pharynx (for a tonsillar premalignant or malignant lesion) may be a good fit for this approach. In addition to allowing for laparoscopic approaches to PDT internally, it may permit more accurate and reproducible interstitial fiber placement. Dr. Cengel and colleagues found that the robotic arms facilitated clear exposure of the tonsil and tongue base with stable administration of fluence.7 “With all these different arms, it is great at holding 10 million things in place, and it has a scope so you can tell exactly where you are,” he revealed.

To achieve the ideal conditions and enhance outcomes with PDT, a close connection between the laboratory and the clinic is critical. This multidisciplinary endeavor includes preclinical researchers, medial physicists, physicians, surgeons, radiotherapy specialists, and nursing coordinators. Refinements in technique are based on both preclinical models and growing surgical experience. To move this technology forward, “it is all about integrating the clinic and the laboratory and having a lot of folks all at the table at once,” Dr. Cengel concluded. 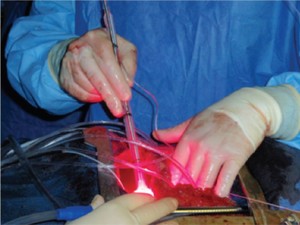 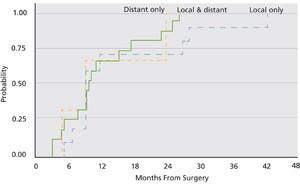