A principal factor in determining the biologic consequences of photodynamic therapy (PDT) is the light fluence rate. Preclinical and, more recently, clinical studies have focused on low-irradiance schemes, suggesting that prolonged light exposure, better known as CLIPT (continuous low-irradiance PDT), may improve tumor control while reducing morbidity. After a brief look at the origin of light therapy and photosensitizers, this article turns to the promising animal research supporting the use of low- and ultra-low fluence rate PDT, which serves as the basis of the ongoing CLIPT dosimetry trials for patients with chest wall progression of breast cancer. The future of CLIPT seems to be a home-based therapy using a portable, self-contained energy delivery system.

With photodynamic therapy (PDT), clinicians often forget that it is not just the drug and the light that are important but also how tissue oxygen is managed, stated Gary S. Rogers, MD, Director, Dermatologic Surgery & Oncology, Tufts University School of Medicine, Tufts Medical Center, Boston, Massachusetts. “How we administer the energy will determine whether you get tumor apoptosis, tumor necrosis, exactly which vasculature you are going to affect, and how you will affect the immune system by giving the light at a lower dose,” he explained.

The Origins of Light Therapy

Granted the Nobel Prize in Medicine and Physiology in 1903, Niels Ryberg Finsen was recognized for his concentrated light radiation treatment of lupus vulgaris, which are painful cutaneous tuberculous skin lesions, revealed Dr. Rogers. This novel treatment approach opened a new avenue for medical science. Less than 20 years later, Sauer1 showed that a carbon-arc lamp could inactivate cutaneous tuberculosis and may be just as effective, if not more so, than x-rays, without the attendant dangers.

In 1904, the term “photodynamic therapy” was coined for the oxygen-dependent destruction of tissue after photosensitization and subsequent irradiation with visible light, continued Dr. Rogers. In 1912, Meyer-Betz2 performed the first human PDT experiment using hematoporphyrin—on himself. After the injection of hematoporphyrin, he exposed himself to sunlight to demonstrate photosensitivity, and the edema and hyperpigmentation persisted for 2 months, explained Dr. Rogers. In 1924, Policard3 reported that porphyrins accumulate in tumors and described a rat sarcoma fluorescing red when illuminated with Wood’s light. And in 1966, according to Dr. Rogers, Lipson4,5 reported on the use of a hematoporphyrin derivative to treat a person with metastatic chest wall breast cancer.

Table 1 lists the characteristics of 3 photosensitizers: porfimer sodium (Photofrin), 5-aminolevulinic acid (ALA), and mTHPC (meso-tetra-hydroxyphenyl-chlorin). The most common FDA-approved photosensitizer is the hematoporphyrin derivative porfimer sodium. In the United States, it is approved for use in Barrett high-grade dysplasia, endobronchial lung cancer, and esophageal cancer. However, in Japan, porfimer sodium is also used to treat cervical and gastric cancers. Used in the United States for actinic keratosis, ALA is also used in Europe for basal cell carcinoma. The second-generation dihydroporphyrin photosensitizer mTHPC is used in Europe, Norway, and Iceland for head and neck cancers, reported Dr. Rogers. In addition to actinic keratosis, other precancerous lesions for which PDT has been used include vulvar intraepithelial neoplasia, cervical intraepithelial neoplasia, penile intraepithelial neoplasia, anal carcinoma in situ, and Barrett esophagus, reported Dr. Rogers.

Characteristics of Porfimer Sodium, ALA, and mTHPC

Dr. Rogers shared his early anecdotal experience with PDT after failure of radiotherapy for chest wall progression of breast cancer, which affects up to 5% of patients with breast cancer and is a major source of pain.6 In addition, Cuenca et al6 used low-dose porfimer sodium-induced PDT to treat 14 patients with more than 500 truncal metastases. All patients showed tumor necrosis, with 9 experiencing complete responses. PDT was a fairly durable cure for 90 days to up to 2 years; however, it was only useful for local disease control, because it did not stop the progression of visceral disease. Although Dr. Rogers admitted that these were impressive response rates for PDT in patients for whom radiotherapy and surgery failed, “the side effects were severe. Even beyond 6 months out, they still had skin ulceration; all required surgical debridement, and about one-third required multiple skin grafts,” he added.

Because wound care was such an issue, Dr. Rogers turned to preclinical research with low fluence rate PDT to improve outcomes. Bisland et al7 were able to deliver both the photosensitizer (ALA) and the light continuously at low rates for extended periods in brain tumor animal models. “They found that if you give the energy at a low-dose rate, you induce much more apoptosis than tumor necrosis [Figure 1]. You are getting an equivalent response but by a somewhat different mechanism,” explained Dr. Rogers. These findings were confirmed by Mathews et al,4 who tested ultra low light fluence rates with ALA PDT to inhibit the growth of human glioma spheroids. They found that growth inhibition is light dose–dependent and that ultra low fluence rates are most effective.8

Therefore, in vitro and animal data with low fluence rate PDT appeared promising, concluded Dr. Rogers. It improved tumor control while reducing the earlier morbidity. At this point, Dr. Rogers and colleagues turned to exploring its use in humans.

Supported by a grant from the Susan G. Komen for the Cure Foundation, a phase I study was conducted of continuous low-irradiance PDT (CLIPT) for patients with chest wall progression of breast cancer.10 The goal was to mitigate the earlier unnacceptable grade 3 skin reactions with PDT in patients for whom conventional therapeutic options failed. A total of 15 patients were treated with ultra low irradiance (starting at 100 J cm2) continuously over 24 hours. Designated as an investigational new device (IND) by the FDA, this treatment was approved for use on only a controlled 10 × 10 cm area of skin.

To the surprise of the investigators, the first cohort did worse, with massive full-thickness skin ulceration, reported Dr. Rogers. Rethinking their approach, Dr. Rogers and colleagues consulted other research on optimizing illumination for PDT with mTHPC in colon animal models.9 They concluded that fractionated or low-powered light delivery could enhance PDT with mTHPC. In reconsidering their preliminary study results, Dr. Rogers and colleagues realized that the PDT reaction may be more efficient with a low-dose rate than with a high-dose rate. “The high-dose rate causes photobleaching of the drug and depleted oxygen, so there is no PDT reaction at that point because there is no oxygen for the drug available at the treatment site. With the low dose rate, there is no photobleaching of the photosensitizer and oxygen is not depleted,” he reasoned. Therefore, they continued their original phase I multicenter study as a dose de-escalation trial.

Fifteen patients completed the study, receiving a fluence rate of 50 J/cm2 over 24 hours.10 “We dropped the dose in half,” reported Dr. Rogers. Of these 15 patients, 11 had a tumor response (2 complete and 9 partial at 30 days). They noted no reaction at the control site, no ulceration of the previously irradiated “normal” skin, and ecchymoses overlying the tumor nodules at 24 hours after treatment. The improved results with CLIPT over conventional PDT are illustrated in Figure 2. Thirty days post CLIPT, the overall response rate was 73%. However, Dr. Rogers reported, the tumor recurred at day 60 in the partial responders, and visceral disease progressed at day 90 in the complete responders.

Two patients were of particular interest. In one patient (a partial responder), nodules 10 cm away from the treatment site had resolved. In another patient, both rib and distant skin metastases had resolved. “There must be some immunologic phenomenon going on in these areas away from the treated area,” proposed Dr. Rogers. He hypothesized that low-irradiance PDT may enhance the activation of antigen-specific T cells (Figure 3), perhaps bolstering the immune response. Further studies on the immunologic effects of PDT are ongoing.

Dr. Rogers also reported on the use of low-irradiance PDT for other cutaneous metastases. In one patient with metastatic Merkel cell carcinoma, a complete response in the treatment area, partial regression of lesions distant from the treatment site, and arrested progression of disease were seen at 6-month follow-up, according to Dr. Rogers. This tumor was highly vascular and the patient did develop grade 3 skin ulceration at the treatment site but healed fully at day 45. Dr. Rogers questioned the role of a vascular response. Based on findings in a rat tumor model, the vascular response may be a major contributor to the benefits obtained with prolonged light exposure.11

The other patient was a heart-lung transplant recipient who had metastatic squamous cell carcinoma of the scalp. He experienced a 50% reduction in the size of the tumors, and progression of the disease was arrested, Dr. Rogers reported. His assessment of pain was reduced from 6 to 1 to 2 on a pain scale, and no ulceration was noted.

Portability Is the Next Step for Low-Irradiance Systems

“We are developing a portable system that is completely untethered and a flexible light source,” announced Dr. Rogers. This wearable device has a self-contained energy delivery system and is ergonomically optimized for continuous use. Flexible light sources with varying shapes, a tight bend radius, and implantable potential are also emerging. Dose-ranging phase II studies should shed more light on the clinical use of these systems.

Dr. Rogers predicted that home-based portable CLIPT will be the wave of the future. “Ultimately, the best place for patients to get their care is in the home,” he declared. This system would contain a battery power supply with 8 to 10 hours of run time and low voltage. Also included would be a power conditioner and a monitor unit. A monitor that can control the pulsing of light can be plugged in at home. Furthermore, based on the findings of Henderson et al12 regarding fluence rates as a modulator of PDT mechanisms in an animal model, it may be possible in the future to provide continuous, low-irradiance PDT for days to weeks at a time via a portable system.

Both preclinical and preliminary clinical studies have shown that continuous low-irradiance PDT may improve tumor control while reducing treatment-related morbidity. It produces effects on tumors through apoptosis and necrosis, on the tumor vasculature, on the normal tissue vasculature (via elimination of skin ulceration), and on tumor immunity. However, additional studies with this novel technique are required to determine how best to use it and who would benefit most. In addition, dosing schemas (fractionated or continuous) require refinement. Its potential for home-based therapy and repeated use over time, with apparently no ionizing and significant side effects, is promising. 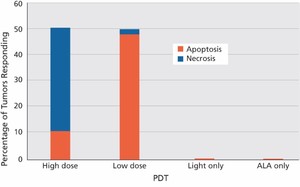 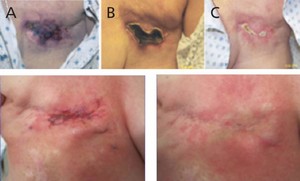