Approximately 22,000 cases of ovarian cancer occur each year in the United States, and likely fewer than 2000 cases of mucinous ovarian cancers. Although 90% of patients with mucinous ovarian cancer present with stage I disease and have curative surgeries, advanced-stage disease is known to have a poor response to standard platinum- and taxane-based chemotherapy. Despite limited enthusiasm, standard chemotherapy is still recommended for most patients with advanced-stage mucinous malignancies of the ovary. This report presents an unusual case of a woman with HER2-positive metastatic mucinous carcinoma of the ovary treated with chemotherapy regimens typically used for colorectal malignancies, followed by epidermal growth factor receptor–targeted therapies.

A 20-year-old woman presented with lower abdominal pain and was found to have a 12 x 19 cm adnexal mass. The patient underwent a left salpingo-oophorectomy with appendectomy, omentectomy, and pelvic and para-aortic lymph node dissection. Pathologic evaluation revealed a stage IA mucinous cystadenocarcinoma of the ovary. No evidence was seen of appendiceal involvement and she was followed up without adjuvant chemotherapy. Two years later, she developed severe right-sided subcostal discomfort, and a CT scan showed extensive metastatic disease to the liver and retroperitoneal and para-aortic lymphadenopathy. Biopsy of a liver metastasis confirmed metastatic mucinous cystadenocarcinoma. The patient received 5-FU, leucovorin, and oxaliplatin (FOLFOX) with bevacizumab. Before the start of treatment, evaluation of tumor markers was notable for a carcinoembryonic antigen (CEA), alfa-feto-protein (AFP), and CA-125 levels of 644, 5149, and 16, respectively. After 6 treatments, CEA levels declined to 28.8 and AFP declined to 5.7; CT scan showed a partial response. Her ECOG performance status went from 2 to 1, initially affected by pain and anorexia. Because of a remarkable elevation of AFP at presentation, an alternative diagnosis of a germ cell tumor with mucinous differentiation was considered, and consolidation with bleomycin, etoposide, and cisplatin (BEP) was delivered for 2 cycles, but unfortunately a rise in both AFP (20) and CEA (46) occurred. PET scan showed FDG uptake in liver masses, with no clear evidence of response. A resumption of FOLFOX with bevacizumab was not effective at stemming tumor marker rise or reducing disease burden.

At this time, other molecular markers were evaluated, including KRAS (wild-type for codon 12 and 13 mutations), epidermal growth factor receptor (EGFR) exon 18–21 mutation screen (wild-type), and HER2 tested with immunohistochemistry (3+). Because of wild-type KRAS tumor status with a mucinous phenotype, 5-FU, leucovorin, and irinotecan (FOLFIRI) and cetuximab was initiated but discontinued secondary to a hypersensitivity reaction with the first cycle. Single-agent trastuzumab was started, and over 3 weekly doses the patient’s CEA trended from 499 to 871, then 664. Restaging CT scan at this point showed that liver metastases had completely calcified without evidence of new disease (Figure 1). With the goal of increasing tumor response, weekly paclitaxel was added to trastuzumab. Over 6 weeks, the CEA continued to trend down to 496 (Figure 2). Before her third cycle and restaging scans, the patient presented to the clinic with new headaches and nausea, and was found to have 4 new brain metastases in the bilateral fontal lobes and cerebellum. She was found to be a suitable candidate for craniectomies, and each lesion was excised over 2 different surgeries. This was followed by whole brain radiation.

While recovering from her brain-directed therapy, new pulmonary metastases developed. The patient had also become deconditioned, and the decision was made to continue with biologic therapy alone. The patient was started on combination trastuzumab and lapatinib. CEA over the next 4 months remained stable with stable hepatic and pulmonary disease. During this time, her performance status improved to ECOG 0; she was able to return to work, and had limited pain medication use. Eventually, retroperitoneal and central nervous system disease progressed.

Mucinous ovarian cancers (mOCs) constitute approximately 10% of all epithelial ovarian cancers (EOCs). Among stage I EOCs, 27% are mOCs, and most of these women are cured with surgical resection.1 Patients with stage I mOC have an improved 5-year disease-free survival rate of 90.8% compared with 75.9% among those with serous ovarian cancer.1,2 However, patients with advanced mOC are thought to be platinum-resistant. In a case controlled study, 63% of patients with stage III and IV mOC experienced disease progression while on single-agent carboplatin, single-agent paclitaxel, or platinum combination therapy, and had an overall response rate of 26.3% compared with approximately 70% among women with the more common serous histology.3 Progression-free survival rates for mOCs compared with all EOCs were 5.7 and 14.1 months, respectively, whereas overall survivals were 12 and 36.7 months, respectively. However, no current guidelines recommend a specific treatment regimen for mOC that differs from that for EOCs.

For select young patients with unilateral ovarian masses, fertility-sparing surgery can be considered, including unilateral salpingo-oophorectomy and uterus preservation. Complete surgical staging and surgical exploration are recommended for these patients, including aspiration of ascitic fluid or peritoneal lavage, exploration of the peritoneal cavity, omentectomy, appendectomy, and lymph node sampling. If more extensive disease is not found during surgical exploration, then fertility-sparing surgery can be performed.

If surgical exploration detects more extensive disease, then plans for fertility-sparing surgery must be abandoned and more complete surgery must be performed as recommended and outlined in the NCCN Clinical Practice Guidelines in Oncology (NCCN Guidelines) for Ovarian Cancer4 (to view the most recent version of these guidelines, visit NCCN.org). More extensive surgery includes aspiration of ascitic fluid or peritoneal lavage, total abdominal hysterectomy, omentectomy, aortic and pelvic lymph node dissection, and complete debulking of any visible tumor (which may include bowel, liver, distal pancreatic resection, partial cystectomy, cholecystectomy, and diaphragm, or peritoneal surface stripping when appropriate). When a mucinous tumor is suspected, an appendectomy should be performed along with a careful evaluation of the gastrointestinal tract to rule out a gastrointestinal primary tumor with ovarian metastasis. Patients with stage IA or IC disease who have fertility-sparing surgery may undergo observation without adjuvant chemotherapy. Patients who do not want or are not candidates for fertility-sparing surgery should undergo adjuvant chemotherapy typically with a platinum/taxane-based regimen if recommended in the guidelines.

Similar to patients with colorectal cancers (CRCs), those with mOCs tend to have serum elevations of CEA unlike those seen with most other EOCs.5 Appendiceal and CRCs can mimic mOCs with presentation of ascites, adenexal masses, or vaginal bleeding. Without a colonoscopy or laparotomy to evaluate the appendix and colon, mOCs can be difficult to differentiate from gastrointestinal cancers.6 The size and location of the tumors may help differentiate gastrointestinal from gynecologic mucinous carcinomas. Seidman et al7 published an algorithm showing that tumors larger than 10 cm and unilateral ovarian involvement were more likely to indicate a mOC than CRC. Alexandre et al8 found that mOCs were more likely to present at a higher stage (P = .004) and had shorter progression-free and overall survival rates than serous ovarian cancer. Immunohistochemical markers for mOCs are more likely to be positive for CK7, CK20, and CEA, whereas only CK20 and CEA are likely to be positive for CRC. Histologically, mOCs are more likely to show a papillary growth pattern, with an expansile pattern of invasion. Metastatic disease from CRC shows a nodular growth pattern with an infiltrative pattern of invasion, and possibly signet ring cells.

Whether advanced mOC should be treated with a colorectal rather than a gynecologic regimen is currently under debate. CRCs are known to have p53 mutations, with reported rates of mutations up to 70%.9,10 Patients with CRC and p53 mutations are at increased risk of death whether the mutation is detected through immunohistochemistry or mutational analysis, and no association exists to treatment with chemotherapy.11 The Cancer Genome Atlas found that 96% of serous ovarian cancers have p53 mutations, but the rate of mutation in mOC is likely much lower, closer to 25%.5,12,13 This lower p53 mutation rate in mOC may be related to its resistance to standard platinum therapy. CRCs are not treated with standard carboplatin therapy but rather with oxaliplatin; the patient in this case report experienced a partial response to oxaliplatin. In vitro, a synergistic effect of 5-FU with oxaliplatin was seen in mOC cell lines with decreased viable cells; in vivo when mOC cells were implanted into the peritoneum of mice, an improved survival was seen when treated with the combination, compared with 5-FU or oxaliplatin alone.14

Approximately 30% to 50% of CRCs can be expected to be KRAS mutant with KRAS overexpression, which is associated with a worse prognosis and poor response to EGFR inhibitors.15 However, patients with wild-type KRAS tumors have improved progression-free and overall survivals when treated with EGFR inhibitors, such as cetuximab and panitumumab.15–17 In mOC, approximately 68% of previously resected tumors were found to have codon 12/13 mutations.18 The remaining 32% of patients with KRAS wild-type mutations would have the potential for responsive disease to EGFR inhibitors. Previous studies of EOCs with EGFR expression and the use of cetuximab did not report whether any of the patients had mOC, but only showed a 6% overall response rate.19

HER2 amplification is found in 15% of CRCs, and is found less frequently in EOCs.20,21 Although no study has been published describing response rates of HER2-positive CRC to trastuzumab, a case report in rectal cancer shows activity.22 In a case cohort study of 33 cases of mOC, 6 patients (18.2%) showed HER2 amplification.23 In 2 cases described, 1 patient responded to trastuzumab after progressing on standard platinum therapy. The other patient developed stable disease for 5 cycles of trastuzumab until she presented with brain metastasis. In patients with metastatic breast cancer who had experienced disease progression on single-agent trastuzumab, treatment with trastuzumab and lapatinib compared with single-agent lapatinib improved progression-free survival and clinical benefit rate.24 No trials with HER2-directed therapy have been conducted in patients with mOC.

New regimens for high-risk patients with mOC have been or are currently being explored. For example, in a phase II study, irinotecan and mitomycin-c were tested in platinum-refractory mucinous and clear cell ovarian cancers, and found a median overall survival of 15.3 months and a response rate of 53%.25 Currently, the Gynecologic Oncology Group in cooperation with the Gynecologic Cancer Intergroup is conducting a clinical trial to compare carboplatin with paclitaxel with or without bevacizumab, and capecitabine with oxaliplatin with or without bevacizumab; progression-free survival and response rate will be assessed.

mOCs are rare, and although described in the NCCN Guidelines and current clinical trials as an EOC, clinical and genomic data indicate that mOC is unrelated to the more common serous cancer arising in the müllerian tract. This case illustrates that treatment decisions for mOC should expand beyond traditional chemotherapy, and tumor histology and biomarkers should be used in making treatment decisions. In this case, we explored the use of CRC chemotherapy regimens as well as molecular targeted therapies targeting the EGFR, HER2, and vascular endothelial growth factor pathways. In this case report, the evidence of stable disease for nearly 9 months on trastuzumab-based therapy and improved performance status is notable and reinforces the need to design studies with therapies that take advantage of amplified or mutant oncogenic pathways. In addition, further genomic studies to better characterize mOC are also needed to find new pathways that should be targeted in the future.

Liver metastases (A) pretreatment, (B) post FOLFOX (5-FU, leucovorin, and oxaliplatin) and bevacizumab, and (C) post-treatment with trastuzumab. 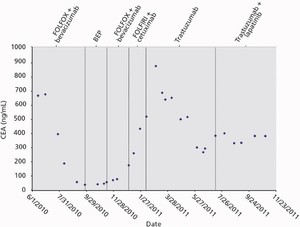