The feasibility of the large, single-dose intravenous iron repletion method, which is known today as total dose infusion (TDI), has been demonstrated over decades. However, this method of iron repletion was chiefly developed for patients with large iron deficits, such as those with pregnancy-induced anemia, chronic bleeding disorders, and absolute iron-deficiency anemia (serum ferritin < 30 ng/mL, transferrin saturation < 15%) who were unable to receive frequent small doses of intravenous iron. Today, 50 years after the advent of TDI, more is known about iron metabolism and storage, but the optimal dosing strategy for intravenous iron in patients with cancer is still not well defined. The proinflammatory state of cancer, or its treatment, may influence the response to intravenous iron therapy. Additionally, the long-term adverse effects of large single doses or smaller more frequent doses have yet to be studied in the oncology population. Historically, safety concerns surrounding the administration of intravenous iron have centered on anaphylaxis. Newer concerns are being raised, such as oxidative stress, iron overload, venous thromboembolism, infection risk, and tumor growth. Therefore, with the original premise of TDI assuming low levels of inflammation, coupled with the recent data surrounding the adverse effects of blood transfusions and erythropoietic-stimulating agents, this article reviews the risks and benefits of TDI administration specifically for patients with cancer. 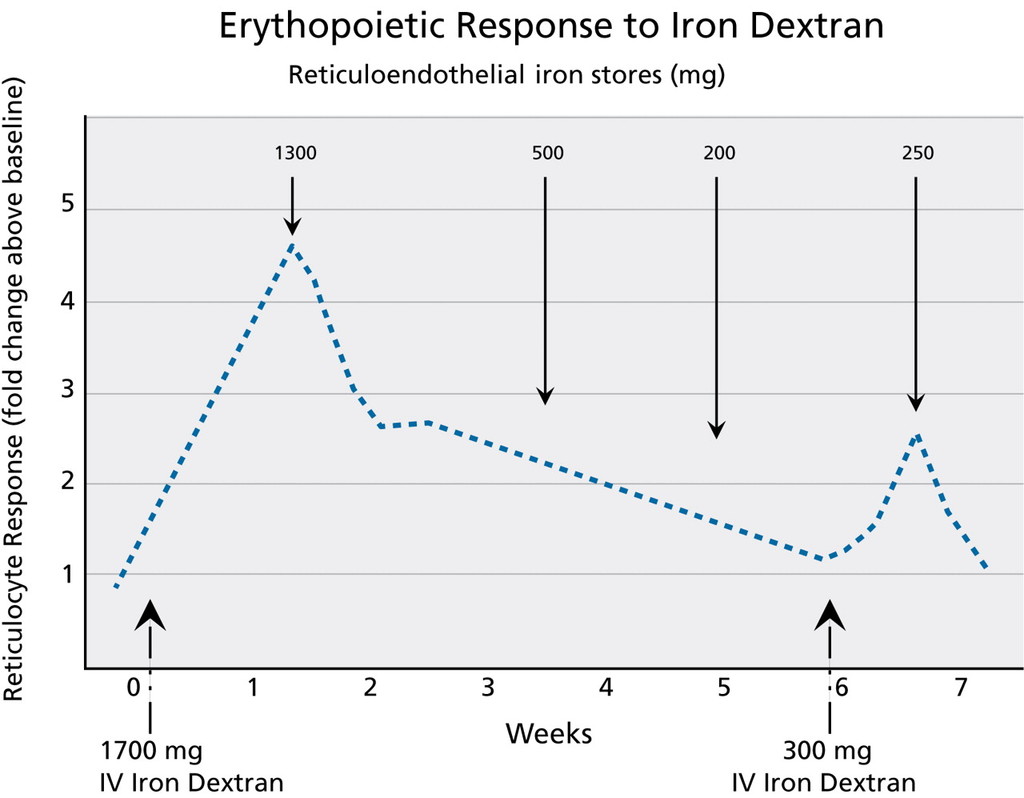 Erythropoietic response to total dose iron dextran versus smaller intermittent doses in an individual patient. On infusion of a single 1700-mg dose of intravenous (IV) iron dextran, the rate of reticulocytosis increased to more than 4 times baseline. Approximately 6 weeks later, a second infusion of iron dextran, 300 mg, was administered to the same patient, resulting in an increase in reticulocytosis of roughly 2.5 times baseline. According to the authors, the increased rate of erythropoiesis began to decline within 2 weeks of administration and was sustained for a short time (≤ 6 weeks) despite adequate iron stores in the reticuloendothelial system. These data suggest that small intermittent doses of intravenous iron may be as effective as total dose infusion. 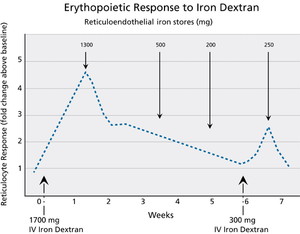