A 59-year-old woman presented with borderline resectable pancreatic adenocarcinoma involving the neck and body of the pancreas. She was treated with systemic chemotherapy followed by chemoradiation, with subsequent downstaging of the tumor by imaging. Subsequent resection had negative margins and negative lymph nodes with only microscopic disease present in the tumor specimen. Neoadjuvant therapy is controversial but could play a role in borderline resectable disease by allowing for higher chance of negative margins at surgery and increasing the chance for cure in these patients. Microscopic disease at time of resection is rare.

All clinicians completing this activity will be issued a certificate of participation. To participate in this journal CE activity: 1) review the learning objectives and author disclosures; 2) study the education content; 3) take the post-test with a 70% minimum passing score and complete the evaluation at http://education.nccn.org/node/4535; and 4) view/print certificate.

Over a month before presentation, a 59-year-old woman developed diarrhea with floating stools and weight loss of 15 lb. She then developed sudden onset of jaundice and presented to her primary care physician. Bilirubin was found to be 10.9 mg/dL and a right upper quadrant ultrasound showed intrahepatic duct dilatation. Subsequent abdominal CT showed a 3.2 × 2.7-cm hypoattenuating lesion within the neck and proximal body of the pancreas. Biliary dilatation, in the absence of a visualized pancreatic head mass, was thought to be a possible sequela of hepatoduodenal ligament infiltration or involvement of the pancreatic head not visualized on CT. Portal vein, splenic vein, and superior mesenteric vein (SMV) were obliterated by the mass, although no evidence was seen of superior mesenteric artery (SMA) involvement (Figure 1). No metastasis was found on the chest, abdomen, and pelvis CT. Endoscopic retrograde cholangiopancreatography (ERCP) was performed with sphincterotomy and placement of a metal biliary stent. Bile duct brushings were positive for adenocarcinoma. CA 19-9 at diagnosis was 260 ng/mL.

Her medical history included breast cancer status-post mastectomy; adjuvant cyclophosphamide, methotrexate, and fluorouracil; and radiation therapy 21 years earlier. She also had a history of cervical dysplasia and had undergone hysterectomy 5 years earlier. At diagnosis with pancreatic cancer, she was tested for germline BRCA1 and -2 mutations and was negative for both. Her ECOG performance status was 1. Bilirubin, which had increased to 27 mg/dL by the time of ERCP, returned to normal afterward.

Because of extensive venous vascular involvement, the patient was started on gemcitabine and oxaliplatin combination therapy. After 4 cycles, CA 19-9 decreased dramatically from 260 to 27 ng/mL. Repeat CT showed tumor shrinkage of the mass to 2.7 × 2.1 cm, a response of more than 30%. She completed another 4 cycles, and had stable disease on CT. She was then switched to concurrent radiation and gemcitabine treatment. She received a total of 50 Gy in 25 fractions of 2 Gy each using intensity-modulated radiotherapy. Gemcitabine was discontinued in the middle of radiation because of the development of grade 4 thrombocytopenia.

Restaging CT after concurrent chemotherapy and radiation showed a stable shrunken mass at the neck and body of the pancreas with occlusion of splenic vein, portal vein, and SMV, with mild stranding near the SMA (Figure 2). The decision was made to offer extended Whipple surgery with SMV and portal vein reconstruction in an attempt for a cure. The CA 19-9 level at this time was less than 10 ng/mL. Therefore, at 10 months after diagnosis, the patient underwent subtotal pancreatectomy with resection of pancreatic head and body, bile duct, gallbladder, antrum, SMV, and portal vein, and reconstruction of both veins using the intestine. Pathologic examination remarkably showed only microscopic residual focus of invasive ductal carcinoma confined to the pancreas, with all 30 examined lymph nodes being negative.

Postoperative course was complicated by weight loss and diarrhea. Attempt at adjuvant gemcitabine was unsuccessful because of worsening weight loss and cytopenia. Therefore, the patient was observed, and now has only intermittent diarrhea and has maintained a stable weight. She continues to have normal CA 19-9 levels with no sign of disease on CT 3 years after resection.

Pancreatic cancer has remained steady as the fourth most common cause of cancer death among men and women in the United States in the past few years, despite ranking as the tenth most common cancer in both men and women.1 This grim statistic is caused by several factors. First, pancreatic cancer typically remains asymptomatic while in its early stages and is usually diagnosed late. As a consequence, only 15% to 20% of patients have resectable disease at diagnosis, whereas approximately 40% have metastatic disease and another 30% to 40% have locally advanced unresectable tumors.2 The second factor in the lethal nature of pancreatic cancer lies in its complex tumor biology and interaction with a dense stroma that make it resistant to currently available systemic therapies. As a result, surgery has so far remained the only possible cure for this disease. Therefore, attempts to downstage local disease to the point of respectability are a cornerstone of therapy.

The AJCC has established staging criteria for adenocarcinoma of the pancreas using the TNM system.3 In the clinical setting, however, most NCCN Member Institutions use a different classification that focuses on the possibility of surgery for cure. Disease is classified as 1) resectable, 2) borderline resectable, 3) locally advanced, or 4) metastatic.4

Tumors considered resectable should have no evidence of metastatic disease or radiographic evidence of SMV and portal vein abutment, distortion, tumor thrombus, or venous encasement. They should also have a clear fat plane around the celiac axis, hepatic artery, and SMA.4 A category of borderline resectable disease has recently been described to capture patients who could be considered for resection in addition to those who are clearly resectable. In the presence of venous involvement of the SMV/portal vein with tumor abutment, encasement but without encasement of the nearby arteries, or short segment venous occlusion resulting from either tumor thrombus or encasement but with suitable vessel proximal and distal to the area of vessel involvement, the tumor would be considered borderline resectable.4 Furthermore, any encasement of the SMA should be less than 180°. Tumors with further involvement of the SMV/portal vein for longer than several centimeters, venous involvement without availability of suitable alternative veins for engraftment, or involvement of the SMA at more than 180° are generally considered locally advanced and unresectable by both NCCN Clinical Practice Guidelines in Oncology (NCCN Guidelines) for Pancreatic Adenocarcinoma and MD Anderson guidelines (to view the most recent version of the NCCN Guidelines, visit NCCN.org).5

In patients with locally advanced unresectable disease, most NCCN Member Institutions prefer to use upfront systemic chemotherapy followed by chemoradiotherapy in patients who have not experienced disease progression. This approach is based on several retrospective studies, most notably the GERCO series.6 In this series, 181 patients with locally advanced disease received gemcitabine chemotherapy for 3 months initially; 29% developed metastatic disease during this period and therefore were spared the unnecessary radiation therapy. Of the rest of the patients, half continued with chemotherapy and the other half received chemoradiation, with the decision made by the investigator. The study found an improvement in both progression-free and overall survival in patients who received chemoradiation compared with the chemotherapy-only arm. This study supports the view that chemoradiation has benefits compared with chemotherapy alone in this patient population, and starting with chemotherapy alone allows patients with occult metastatic disease to be excluded. An ongoing phase III trial is examining this approach.

Use of neoadjuvant therapy for borderline resectable disease or to convert locally advanced disease to resectable disease is more controversial. Although randomized data are lacking, several retrospective studies have shown an increased chance of resection in locally advanced disease and higher R0 resection in borderline resectable disease after neoadjuvant therapy.7,8 Some have expressed concern that during treatment patients may become unresectable if no response to therapy occurs. This does not seem to be the case based on early-phase trials.9 Currently, most NCCN Member Institutions prefer to use neoadjuvant therapy, as it was done in this patient, instead of attempting upfront resection in borderline resectable patients. The rationale for this approach is to allow patients to have an easier resection after possible tumor shrinkage, a higher chance of an R0 resection, and a higher chance of receiving all cycles of therapy before rather than after surgery, and to exclude patients who manifest metastatic disease during therapy.9 Several phase I/II studies have shown benefit from this approach, and have documented R0 resection rates of 15% to 40% and major pathologic response in up to 80% of patients.7–11 Improved survival has also been noted in patients in whom R0 resection was achieved, comparable to those with resectable disease.8,12

The optimal neoadjuvant regimen for borderline resectable disease has not been established. Benefit of chemotherapy versus chemoradiation or both has not been documented either. NCCN Guidelines recommend similar treatment paradigms to those used in locally advanced disease, and most centers use either concurrent chemoradiation with 5-FU or gemcitabine, or upfront systemic therapy followed by chemoradiation therapy. The patient in this case report was treated with systemic gemcitabine combined with oxaliplatin. Some reports have suggested benefit from platinum agents in patients with BRCA-positive breast or pancreatic cancer.13,14 Therefore, oxaliplatin was added to this patient’s treatment because of her positive personal and family history for breast cancer, despite her being negative for BRCA mutations. Other options for chemotherapy are 5-FU–based therapies, such as FOLFIRINOX (5-FU, oxaliplatin, irinotecan), although no trials have been performed with this particular regimen in the setting of nonmetastatic disease. This patient was subsequently treated with concurrent radiation with gemcitabine for more local control of the disease. Evidence shows that gemcitabine is as effective or perhaps better than 5-FU as a radiation sensitizer.15

The NCCN Guidelines for Pancreatic Adenocarcinoma define strict criteria for resectable disease versus borderline resectable and locally advanced disease (to view the most recent version of these guidelines, visit NCCN.org). Surgery remains the only possibly curative modality for pancreatic cancer. Therefore, neoadjuvant therapy for borderline resectable disease offers a chance at increasing negative margin resection rate for a greater number of patients while sparing patients who develop metastatic disease during therapy from a major surgery. In the patient presented in this case report, neoadjuvant therapy, including chemotherapy and chemoradiation therapy, allowed for tumor resection and resulted in an almost complete pathologic response, with only microscopic disease remaining in the resected pancreas. Neoadjuvant approach could be used in a significant proportion of patients with pancreatic adenocarcinoma who would otherwise have a much lower chance of cure. Ongoing phase III trials are evaluating this approach.

The authors (Parvin F. Peddi, MD, and Andrea Wang-Gillam, MD, PhD) have disclosed that they have no financial interests, arrangements, affiliations, or commercial interests with the manufacturers of any products discussed in this article or their competitors.

Ms. Fair has disclosed that she has no relevant financial relationships. 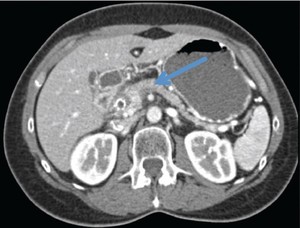